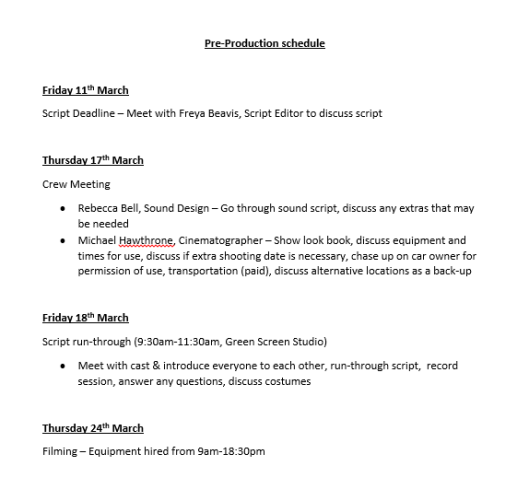 Posted by lydiacatherine | Filed under Uncategorized

Posted by lydiacatherine | Filed under Uncategorized

Picking the soundtrack for a film is just as important as the rest of the film. It’s the last thing the audience hears which is why it is best to pick  song that sticks in the head until it hurts. When they hear the song, they’ll re-live watching the film, it suddenly becomes what they associate that particular song with.

When it came to picking the right song for my film i new it had to be a cheesy 60’s song, this not only goes with the feel of my modern 60’s set era, but also relates to my and bounces off my dark comedy story.

I researched a range of classic songs such as:

I decided on Manfred Mann’s, ‘Do Wah Diddy Diddy’. I felt that this gave the right feel to my film over the rest, as catchy as they all may be. The release date is 1964, and by law, music released 50 years or more is free to use. However i did take it upon myself to contact the HMV Record Label to ask for first hand permission to use the song for my student film. I have not yet had a reply, all the same it is not mandatory.

When writing my script i wrote the role of Murphy specifically for Freya Beavis, already securing a role for her when discussing ideas. After i decided to play the role of Stephanie i still needed an actress for Helen. Contacting an actress i had worked with previously, and after i was told she was unavailable i was put in contact with another actress who was willing to take part in my project, Natasha Wise. I looked through previous jobs she had worked on and showreels etc, knowing straight away she was my Helen. For the two other male roles, seeing as they were small i contacted people who i new would be free at the time of filming and had experience.

I had made sure i had enough time before shooting to meet with my chosen cast to get to know them, introduce the film and what i expect and to read through the script to prepare everyone for the day of the shoot.

We started by sitting in a circle and reading lines out loud, so i could give any direction on how i wanted specific lines said and any questions they had about the script i was able to answer.

We then moved onto the physical side of the script. We set up chairs in the way a car would be for the beginning scene, and the the second half of the film used a mannequin for the what would have been the victim on the ground. This gave everyone a better understanding to how the scene would be played out. Everyone was very co-operative and delivered great performances which made me very confident for when it came to filming.

When i began writing the script for Betty, it had already been a while since my last script. I had the ending to my story before the beginning, so finding different way of getting my characters into that situation while keeping to the allowed time span of the film was a little difficult – For some reason it would just not flow. Thus me bringing in a Script Editor, she helped a great deal with the dialogue to produce a more fluent script.

My role as a Producer was the most important. I was in charge of everything from start to finish, my main responsibility making sure my cast and crew were updated at all times and making sure they were doing their job to great standards.

My role including things such as:

When planning how i wanted my film to look i worked very closely with my Cinematographer Michael Hawthrone and Co-Director Abdalla Al-lili. I didn’t go into too much detail with my storyboard knowing from past experience that when it comes to filming it never goes to the step by step drawings i have spent so long producing. Instead i made notes on my personal script with little diagrams of ideas i had had for certain shots/scenes.

A lot like my role of Producer i had to keep everyone focused on the sets, especially with the limited time we had to film each scene.

Producing the film as well as Directing and starring, i did put a little bit too much work on myself. However the time and effort i put into my film, i feel certainly paid off.

With each of my characters having different personalities, i feel it is vital for them to have a different look to one another. Set in a modern 60’s/70’s world, i have a little leeway when it comes to having accurate fashion for that time.

The 60s saw the rise of mod styling with accessories including Chelsea Boots complimented by soft Italian leather jackets.

However sun dresses were just as popular, giving a more softer and innocent look.

The still very popular hair and make-up styles from the 60’s/70’s are very distinctive, focusing mainly on the big hair and cat-eyes.

Stephanie is sitting in the front seat, tapping her fingers against the car door while listening to the radio (Live Baseball game/commentator). Helen is lying down in the back reading a magazine while humming. The sounds are mixing together as the scene flashes back to the night before – Stephanie and Helen are walking down the street, Steph is dragging the baseball bat along the wall as Helen takes a swig out the of the liquor bottle. Steph hands her a wallet, chucking the bottle Helen starts to throw the cards etc out of the wallet looking for money.

Steph turns of the radio – Conversation

Steph asks where her cousin Murph is. “She’s late!”

Murphy starts to approach Steph, immediately we can see she’s a strange character, not giving Steph a great first impression.

After a brief encounter they both join Helen back in the car and talk over the victim Murphy has found to rob from.

Steph and Helen explain how they work and joke about how their baseball bat ‘Betty’ is part of the team and how she’s had to intervene in more than one occasion.

They all agree to job.

(transition from day to night)…..

Murphy is sitting in the car whistling while flicking through a magazine. She stops in silence, she see’s that the target isn’t the target at all. “Shit”.

Steph and Helen come running out a house down the street an angry man following. They find out that he is not the man they were looking for. As he threatens to call the police he suddenly drops to the floor. Murph is standing behind holding the bat shaking.

Steph takes the bat of Murph telling her to never touch it again and that they’ve never hurt anyone in their lives. As another man approaches and see’s the body on the ground, Steph has no other option but to swing the bat herself.

As the credits roll it cuts back to show Steph and Helen trying to move the first body, Murph is on the chill out step. Helen screams as the second man groans and tries to grab her leg, she picks up the bat and dramatically smashes it onto him screaming. Steph and Murphy are in silence watching. “Really?”