Two of the three main characters are named after histories famous female gangsters. Stephanie – Stepanie St. Claire, and Helen – Helen Gilles. The reason for this is…

The third character Murphy, is after Murphy’s Law. I feel this describes the characters antics as someone who gets themselves into trouble. However, the adage that is typically stated as: “Anything that can go wrong, will go wrong”, sets how the story turns out…Things go wrong and also arising the question, “Would this scenario have happened if there was no bat, or even no Murphy?”

Quentin Tarantino has always been one of my favourite film-makers and my main inspiration for this project. One of the main things that brings me into his work i his writing, the dialogue used in the conversations between characters and the genre of dark comedy helps the story flow with a sense of humour, despite what they may be talking about has nothing to do with the main storyline. This however keeps the audience entertained and gives a better insight into the character’s personally.

Much of my film will be filmed in a beautiful vintage 50’s car, and to take as much advantage of this i have been analysing scenes from his films Death Proof and Pulp Fiction, where many of his scenes are car based. In Pulp Fiction for example, i have been looking at the way he has placed certain camera and how he has made the scene flow in a typical ride along with a pal.

For my scenes the car will be parked with an extra character in the back seat, so looking at scenes from Death Proof, i have a better idea how to set the scene with more spaced out characters and how they interact.

Death Proof has also inspired me to mix up the visual to my film. The film is edited and put together to give a 70’s/modern film, with the first half edited with scratches overlaying to make it look like an old film reel, the characters dressed in retro looking clothes with Kurt Russell pulling off a mullet and of course the vintage cars. For my film i plan on experimenting with these themes throughout the production and post production phase.

I have chosen to Write and Direct. I have written two scripts, one i have already chosen to make and the other to use as a back-up, this is because i feel my chosen script explores more with imagination and with the time period i have to make it, i am positive it will be finished in time of the deadline.

Quentin Tarantino being one of my favourite writers and directors, he is the inspiration for my short film. His conversations between characters being one of my favourite aspects of his work. Not only are they humorous but they give you a better insight to what the characters are really about, their personalities are more defined and their intentions become more self explanatory. I have mostly been looking at his films ‘Death Proof’ and ‘Pulp Fiction’ as research and inspiration while writing my film. 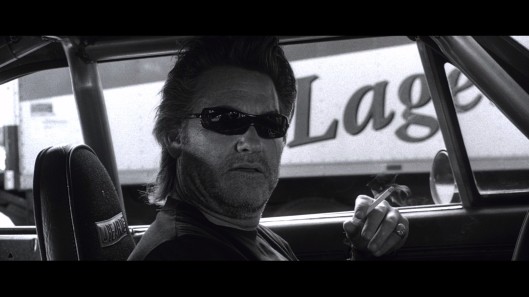 The story follows three young women and their baseball bat, Betty, as they research rich men or relatives of a fortune, manipulate them until they can rob them personally and of their household goods. However when the new member of the team is given the responsibility to research the new victim using the new craze Facebook, things suddenly turn sour as the group are faced with the panic of what to do when they get caught out. This looking more into and relating to the modern day female ‘Gangster’.

I want this project to be where i can really get creative in the sense of writing my characters and visually on screen. Set in modern times with the twist of the 60’s, the world in which it is set is my own universe. To put it simply, what the universe i would like to live in. For example, my characters will have a more modern 60’s style, with their clothing, hair and make-up and car etc, while they take out their mobile phones and use modern language and references. I want the audience to ask the question, when is this film set?

Option between 2 vintage cars to use

Looking for: A male actor (one in mind)

Choosing this script, it allows me to also experiment with the comedy genre. In this instance black/dark comedy. My other script, a drama, is a lot more time consuming, with more actors, locations and a much higher budget. I plan on making this film in the summer as i have a Producer who is interested in working with me for this project. In the past i have written quite a few stories in the drama/ romance genre, so i think working on comedy is definitely a new challenge for me. I feel the the process of making this film will be a lot of fun, especially working with a crew i haven’t worked with before.